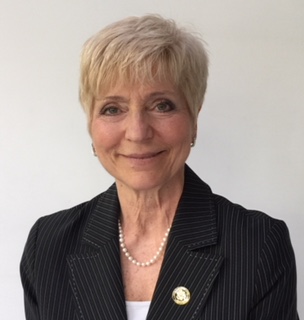 More than 50 people gathered in September to say goodbye to career law clerk Gioia Gensini, a backbone of the Court for the past 40 years. At a catered event at Yards Grille at Green Lakes State Park outside of Syracuse, they listened to expressions of admiration and respect from U.S. Circuit Judge Rosemary S. Pooler and Chief U.S. Magistrate Judge Andrew T. Baxter, and then expressions of thanks by Gioia herself.

During her career, which started in 1982 and is believed to rank as the longest of any federal law clerk in the country, Gioia served as the law clerk to three U.S. Magistrate Judges (Edward M. Conan from 1982 to 1987, Gustave J. DiBianco from 1987 to 2010, and Andrew Baxter from 2010 to 2022).  Just as importantly, she served as a resource, friend and mentor to countless members of the Court family, as well as a leader of both the Onondaga County and the New York State Bar Associations.

In the words of Chief U.S. Court of Appeals Judge Debra Ann Livingston in a congratulatory letter:

Over the past four decades, you have provided invaluable counsel to judges in the Northern District, helping not only Magistrate Judges Conan, DiBianco and Baxter, but the entire District, as it navigated through the major changes in the role of Magistrate Judges instituted by the substantial statutory reforms of this period. You have earned the respect and admiration of those with whom you have worked – not to mention their friendship.

More details about Gioia’s storied career can be found in the profile of her published in the summer 2018 edition of the FCBA’s newsletter,  https://www.ndnyfcba.org/speaking-to-gioia-gensini/